WaterAid is an international charity with a vision of a world where everyone, everywhere has safe water, toilets and hygiene. Since 1981, it has helped millions of the world’s poorest and most marginalised people access these vital human rights, expanding into 35 countries across Africa, Asia, the Pacific and Central America. The charity is headquartered in London, UK.

All charities have a responsibility to use donations responsibly, efficiently and in the way they were intended. This is important in maintaining the trust and support of donors, and to comply with industry requirements such as the International Aid Transparency Initiative (IATI).

Large grants must be particularly carefully managed. These could be awards from Governments or foundations, or generous gifts from philanthropists. Because the sums of money involved can be substantial, and donors have typically given them to support a particular project or outcome, WaterAid needs a way of tracking the funds and managing how they are spent, observing any associated spending restrictions. It must also be able to map grants to outcomes so that the charity can keep donors informed about what their money has achieved.

Although WaterAid already had a system in place to manage large grants, its capabilities were limited and the charity had outgrown it. “We had built it to meet an urgent need, knowing it would have a fairly short lifespan,” explains Hilary Branfield, business analyst at WaterAid UK in London. Managing funds of £30 million+ each year, and with 150 active grants on the go at any one time, as well as historical records to access and manage, the charity needed a more comprehensive and robust grant management system. In due course this will be integrated with other back-office systems. The new system needed to be intuitive to use and include a database; a way of managing restrictions, approvals and income; easy reporting; and storage for key documents. It needed to be accessible via intermittent Internet connections, and be usable in different languages. 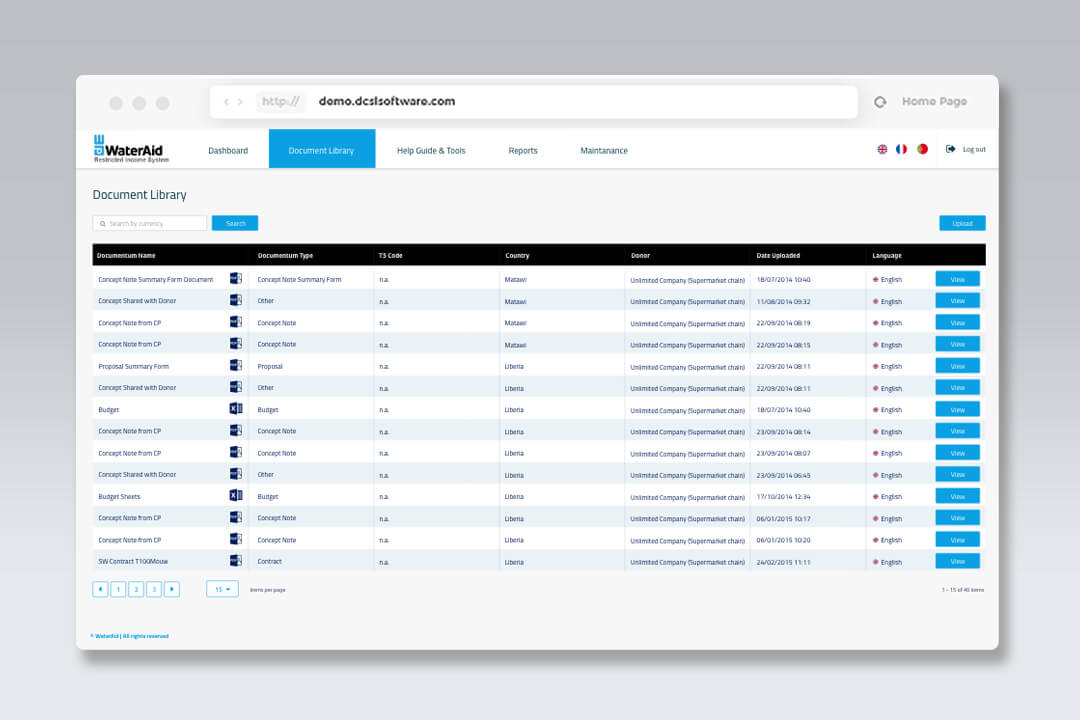 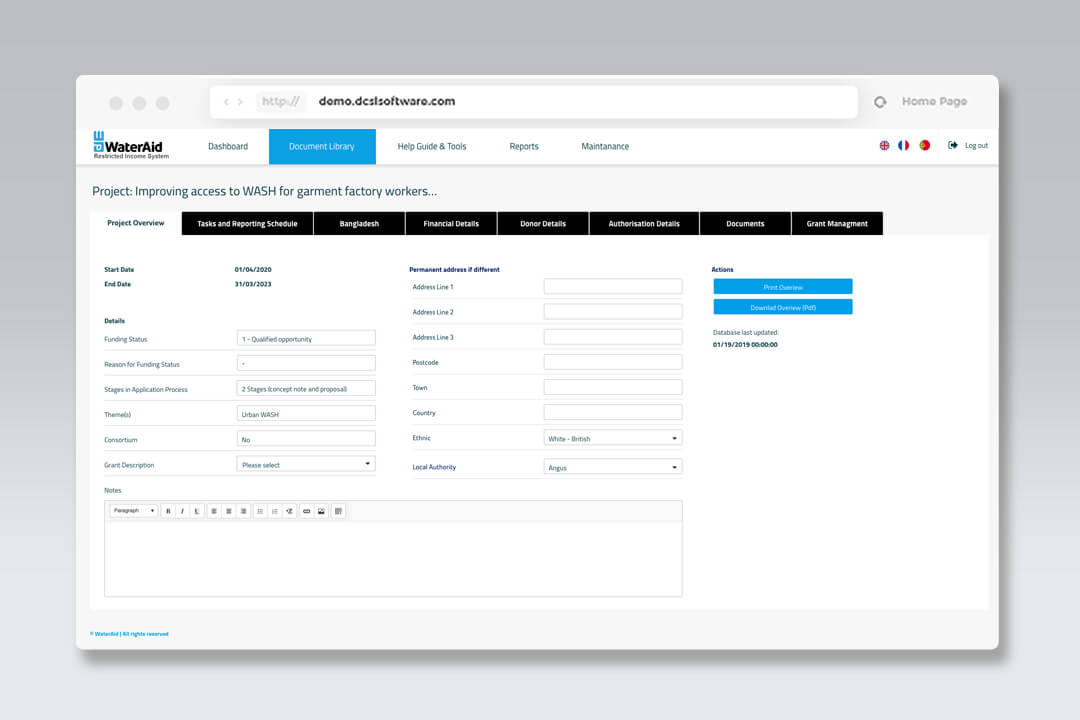 As WaterAid’s customer relationship management and financial planning systems are Microsoft based it was important that the new system would be too, to support integration and data sharing. The IT team looked at a number of options including off-the-shelf software and bespoke development companies. It selected MS Gold Partner One Beyond as offering the best value for money and the most able to deliver what WaterAid needed. “Value for money is a huge consideration for a charity,” Ms Branfield explains. “Although all of the options were in the same ballpark on price, it was clear we would be getting a lot more with One Beyond – a whole team.”

Working with WaterAid’s IT department, One Beyond drew up a specification that met all of the charity’s requirements, and quickly generated a prototype for users to review. This offered a chance for remote project teams to give early feedback from their remote locations. “We like the way One Beyond works,” Ms Branfield says. “I was able to show our end users all over the world what we were working towards, using online demos.”

We like the way One Beyond works. I was able to show our end users all over the world what we were working towards, using online demos.

Having early user input enabled One Beyond to develop the new system efficiently, in time for WaterAid’s tight deadline which was just five months away. “There was some time pressure – we needed the system before the end of the calendar year because that’s when we do our annual financial planning, and we needed access to all of the information so we could do this efficiently,” she notes.

One Beyond developed the system using Microsoft ASP.NET MVC 5 and C#, underpinned by SQL Server, to create a functionally-rich system which also uses the Internet efficiently, without requiring a high-speed connection. “One Beyond understood from the start that this wasn’t a UK-specific system – that we needed to cater for users in hard-to-reach parts of the world,” Ms Branfield explains.

The new Restricted Income System is able to capture all of the details of a grant and the conditions attached to it, and follow it through to project completion. Previously, systems administrators would have to download data into Excel to produce reports manually, whereas the new system supports live reporting. This is boosted by the ability to filter and search, so users can get to the information they need in a few clicks – for example identifying all grants for a particular country.

“People particularly like the reporting,” Ms Branfield says. “They couldn’t easily to get to what they wanted before, whereas this system is great and does everything they need. They’re very happy with the user interface, and the way it’s all working. We’re getting good feedback.”

This additional visibility will prove invaluable for projecting future income and planning projects, she adds. “It’s very important that we have good insight into our income and what this might be.” 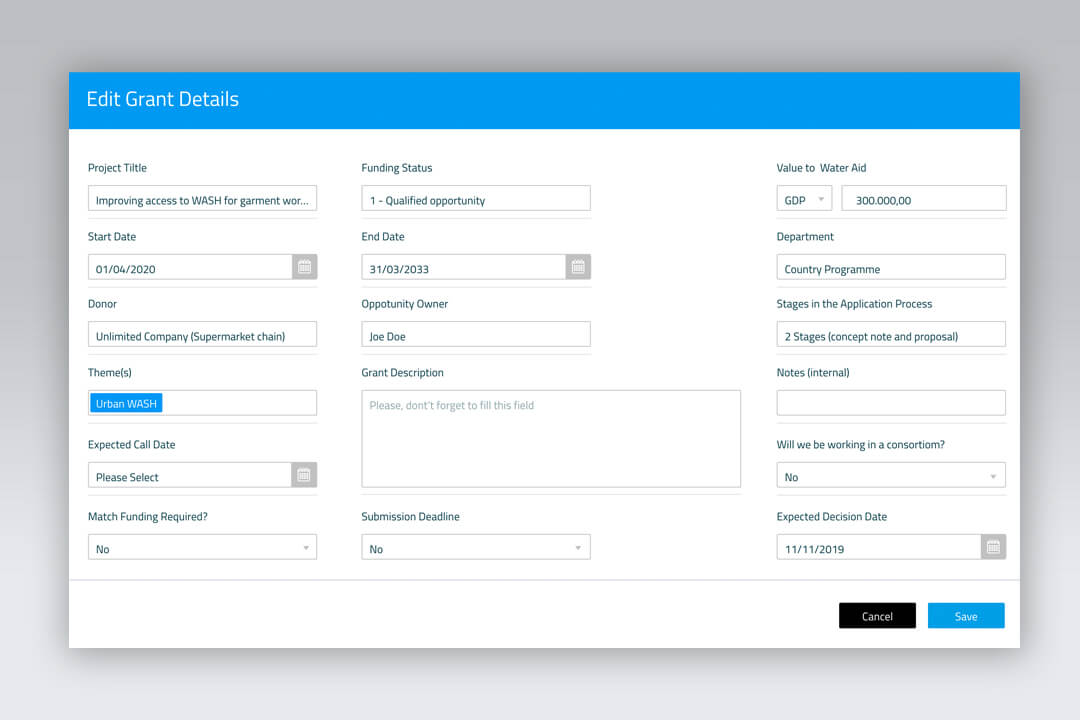 “The next stage is to import data from our CRM and accounts systems, and to start looking at how we can export from the new grants system directly into our financial planning system,” Ms Branfield says. “This development project with One Beyond is part of multiple system improvements we’re working on, and our next goal is to be able to report from multiple systems at once. This will help inform in-country management planning and spending decisions.”

The fact that local teams can use the system in their own language is invaluable, she adds. “The old system was just in English, whereas the new one also supports French and Portuguese. It’s really important we have this, so people don’t have to think twice when using the system. One Beyond has built in the capability to add other languages too – so if we need to introduce Spanish in future, which I can see happening, that’s all been planned for.”

Of the One Beyond development project, she says, “It’s been a very positive experience working with such a professional team. We have had constant contact throughout, and nothing has been too much trouble. We’re delighted with the new system and are very glad we found One Beyond. We look forward to our continued collaboration.”

It’s been a very positive experience working with such a professional team. We have had constant contact throughout, and nothing has been too much trouble. We’re delighted with the new system and are very glad we found One Beyond. We look forward to our continued collaboration.

Are you in need of a bespoke web application for your business?