Each time S&N’s surgical robot is used in a procedure, it generates rich data, which could offer surgeons valuable insights into operating performance and outcomes. But the data is so complex that, until now, only specialist engineers could interpret it. To help drive targeted insights that would help surgeons in their work, S&N needed a way of transforming complex, procedural data generated from a surgical robot into intuitive dashboards that could be easily visualised by their customers.

S&N applied for Government funding via Innovate UK to investigate the feasibility of developing prototype dashboard software for future commercial use. Thanks to the digital health emphasis of the project, S&N secured a grant of £699,531. The terms of the award were that S&N could only spend the money with financially-sound British SME technology companies.

Having access to skills like One Beyond’ss is critical to our future strategy to improve efficiency and outcomes in the OR. Their work is highly professional – plus they are great communicators, and very easy to work with. They have made light work of a complex requirement, and we’re excited to see where this could take us.

After a formal tender and vetting process, S&N engaged three partners: One Beyond to translate the sophisticated data feeds from the system into intuitive web and mobile dashboards; additive manufacturing consulting specialist Euriscus Ltd; and Imperial College London to oversee the coding requirements for a new surgical workflow centred on osteoarthritis treatment of the knee joint.

One Beyond was a strong contender from the outset. “As well as ticking all of the Government boxes on size, turnover and solvency, One Beyond was an experienced Microsoft Azure Cloud service provider, with a direct relationship with Microsoft” explains Darren Wilson, Project Manager and Senior Scientist within Orthopaedics Research Technology and Innovation at S&N. “This was important for S&N because we wanted to collaborate with a Microsoft approved company to help us progress from initial concept to beta testing as part of our journey to launch a cloud-ready application with both back-end and front-end architecture that could host and analyse procedure data securely.”

One Beyond also had extensive experience of creating dashboards for use in a wide range of industries, including healthcare. “They were local, too, and use an agile/sprint-based product development approach as standard, which is our favoured way of collaborative working,” Darren adds.

One Beyond’s ability to get to grips with the complex structure of case files for logging procedural data was astonishing, he notes. “This spoke volumes about the people we were dealing with. The information they have to compile and process in the cloud to create the database schema behind the dashboards is incredibly complex, but One Beyond’s developers grasped this extremely quickly.” The beta version of the Digital Dashboard web application that One Beyond has created collates case log files during each surgical procedure, extracting information used for analytics and displaying key findings in a visually attractive format.

One Beyond has also created a beta version of the mobile app in addition to the web-browser, for iOS and Android devices, which could act as a companion for end-users in the future, so they can access their own data and performance trends.

The information they have to compile and process in the cloud to create the database schema behind the dashboards is incredibly complex, but One Beyond’ss developers grasped this extremely quickly.

As a Government-backed project, this programme of work had to meet certain deliverables: fortunately everything has gone to plan. “One Beyond even finished the beta software ahead of time, creating an opportunity for us to take things further with them, exploring the possibility of exploring machine learning solutions to solve other bottlenecks in the workflow,” Darren says.

On the value One Beyond has brought to the project, Darren is effusive. “Keeping our products on the market, and improving its performance and outcomes, depends on being able to understand, interpret and act on the collected data, and that’s what One Beyond has given us,” he explains. 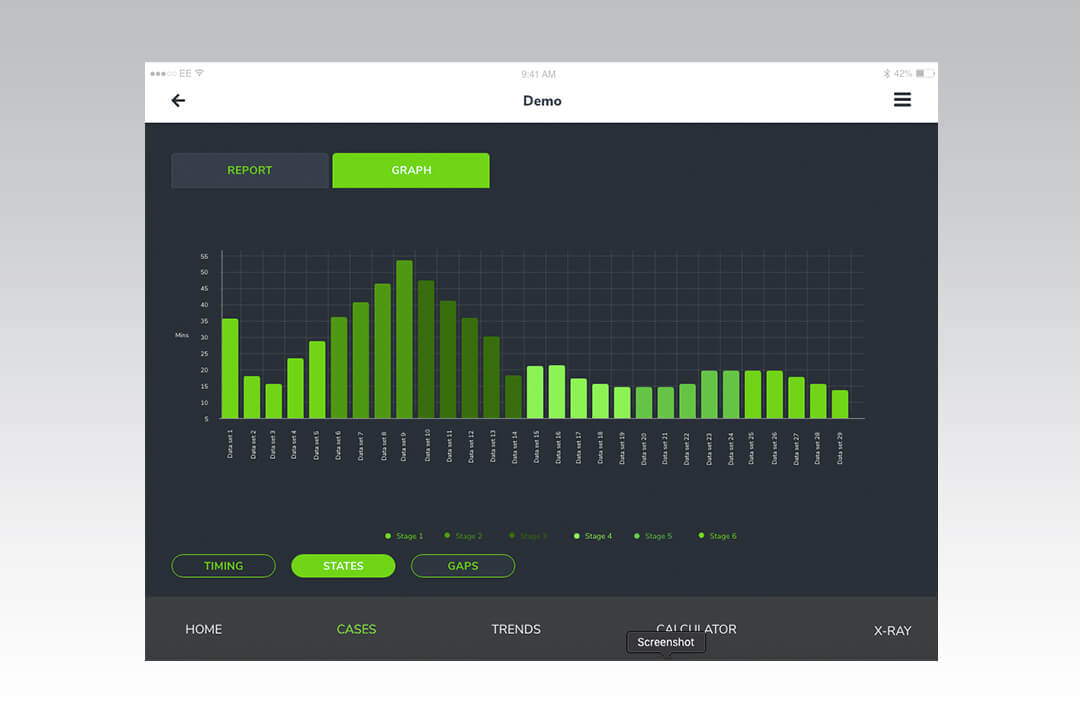 The smooth-running of the project bodes well, as S&N’s ambitions remain high. “Without question, digital health is the future of healthcare,” Darren concludes. “Having access to skills like One Beyond’s is critical to our future strategy to improve efficiency and outcomes in the OR. Their work is highly professional – plus they are great communicators, and very easy to work with. They have made light work of a complex requirement, and we’re excited to see where this could take us.”

Looking for a bespoke software solution for your business?

Talk to us about our Bespoke Business Application Development Services