Hospify is an ambitious new UK start-up which has combined frontline medical experience and modern IT skills to transform spontaneous everyday communication in healthcare.

Hospify is a direct response to the gap in the market for a secure app for real-time messaging between clinicians, support staff and patients. Until now, use of WhatsApp has been rife in healthcare – despite the fact that the consumer app isn’t designed to meet strict patient data protection requirements. Its popularity is due to the convenience of instant messaging for getting in touch with someone quickly – for example, when seeking a second opinion on a patient case.

Now, however, the authorities are clamping down on use of non-compliant messaging platforms, and with EU data protection rules which came into effect in May 2018, carry heavy penalties for data breaches involving sensitive personal data, particularly in relation to health. Hospify offers a solution.

Although the Hospify team itself has significant technology expertise, the company had set a deadline for the app’s launch and needed to accelerate project delivery by calling in external experts.

“We had a trial coming up and needed to have something in the app store ready for an upcoming roadshow,” explains Neville Dastur, co-founder, director and CTO at Hospify, who as well as being a skilled programmer and healthcare IT advocate is a practising consultant vascular surgeon at Frimley Park NHS Hospital in Surrey. 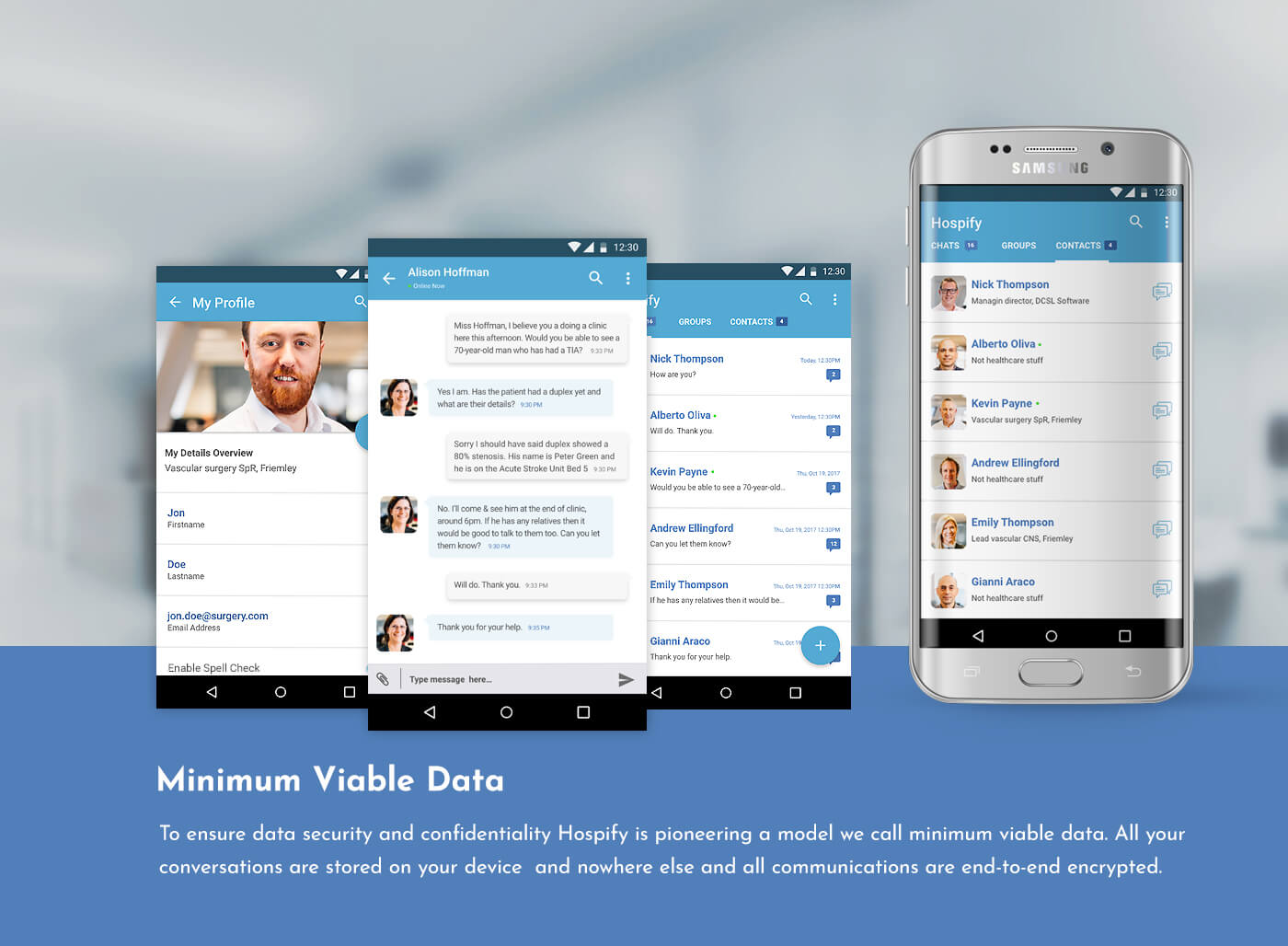 He heard about One Beyond on a local radio station, where the bespoke software company was advertising for additional developers – in particular specialists in the cross-platform mobile environment Xamarin, to meet the growing demand for mobile apps. These were exactly the skills Hospify needed.

Given the tight timeframe, engaging a local development company also presented significant benefits to Hospify. “Having plenty of face-to-face time was going to be important to achieve the best possible results in the time we had,” Mr Dastur explains.

When he enquired about One Beyond’s existing Microsoft Xamarin talent pool, he discovered that it had all the skills and capacity Hospify needed. “Better still, they had done a lot of successful work for Frimley Park Hospital – the IT director is a customer – so we had internal validation,” he says.

Drawing on One Beyond’s ready-made team meant that Hospify could hit the ground running with the next phase of the app’s development. “We didn’t have to delay progress by interviewing and recruiting,” Mr Dastur notes. “We were able to simply add in resources very flexibly, as needed. This has been incredibly useful for meeting deadlines.

The skillset we’ve had access to is very comprehensive – beyond experienced mobile developers, we’ve been able to call on talented designers, software architecture, graphic design, QA and problem – solving skills

“The skillset we’ve had access to is very comprehensive – beyond experienced mobile developers, we’ve been able to call on talented designers, software architects, graphic designers, QA and other problem-solvers” he adds. “One Beyond has brought to bear a much wider team than we could achieve internally – they’ve got at least 100 people, so we haven’t had to worry about availability.”

One Beyond has brought to bear a much wider team than we could achieve internally – they’ve got at least 100 people, so we haven’t had to worry about availability

The Hospify app boasts several innovative features. One of its critical differentiators is that it restricts message transfer to cloud servers based exclusively with the European Economic Area. Passing content outside of Europe for example via servers based in the USA, can itself be counted as a data breach under the new EU data laws, even if that content is encrypted.

To ensure data security and confidentiality, conversations conducted over Hospify are securely end-to-end encrypted while in transit, and then deleted from Hospify’s server network once they’ve been delivered. This means that the only copies of the messages are those stored on participants’ devices.

Other attractive features include the ability to easily find and form connections with other healthcare users via the in-app directory; pin code protection on the app itself (which provides an extra level of security); and the ability to see whether messages have been received or read, something that can be important to clinical groups but which can’t be achieved with pagers or email.

At the time of writing, Hospify is about to take its app to the broader market. With competition growing, the team is keen to keep innovating so that its app stays ahead of potential rivals.

The next major feature on the roadmap to be introduced imminently is support for picture messaging, so that clinicians are able to securely share X-rays and other medical images. “A picture can tell a thousand words, so this facility will be invaluable when sourcing expert opinions at distance,” Mr Dastur explains.

Although the target use for Hospify is very specific, the company’s founders are keen to make it the best product it can possibly be, and have retained One Beyond indefinitely as a continuing development partner to keep enhancing the app, and when the time comes, to adapt it for other markets.

Besides intending to roll the app out into other European countries – aided by the fact that Hospify is built on a multi-lingual platform – Mr Dastur anticipates opportunities in other industries, such as local government and the legal sector, where spontaneous, secure messaging offers great value.

What’s great is that Nick Thompson, One Beyond’ss Managing Director, is very well connected, and is already helping getting Hospify out across healthcare

“What’s great is that Nick Thompson, One Beyond’s CEO, is very well connected, and is already helping getting Hospify out across healthcare,” Mr Dastur says.

“We see this as a long-term partnership, not a one-off project,” he continues. “One Beyond have proven to be very flexible – being both incredibly responsive and willing to work in a range of different ways, from using agile methods to letting us take the lead when we have known exactly what we want. They haven’t tried to shoehorn us into a particular process. Above all, they give us all the services and skills we need from a local base, at a competitive price point. It’s been the ideal match.” 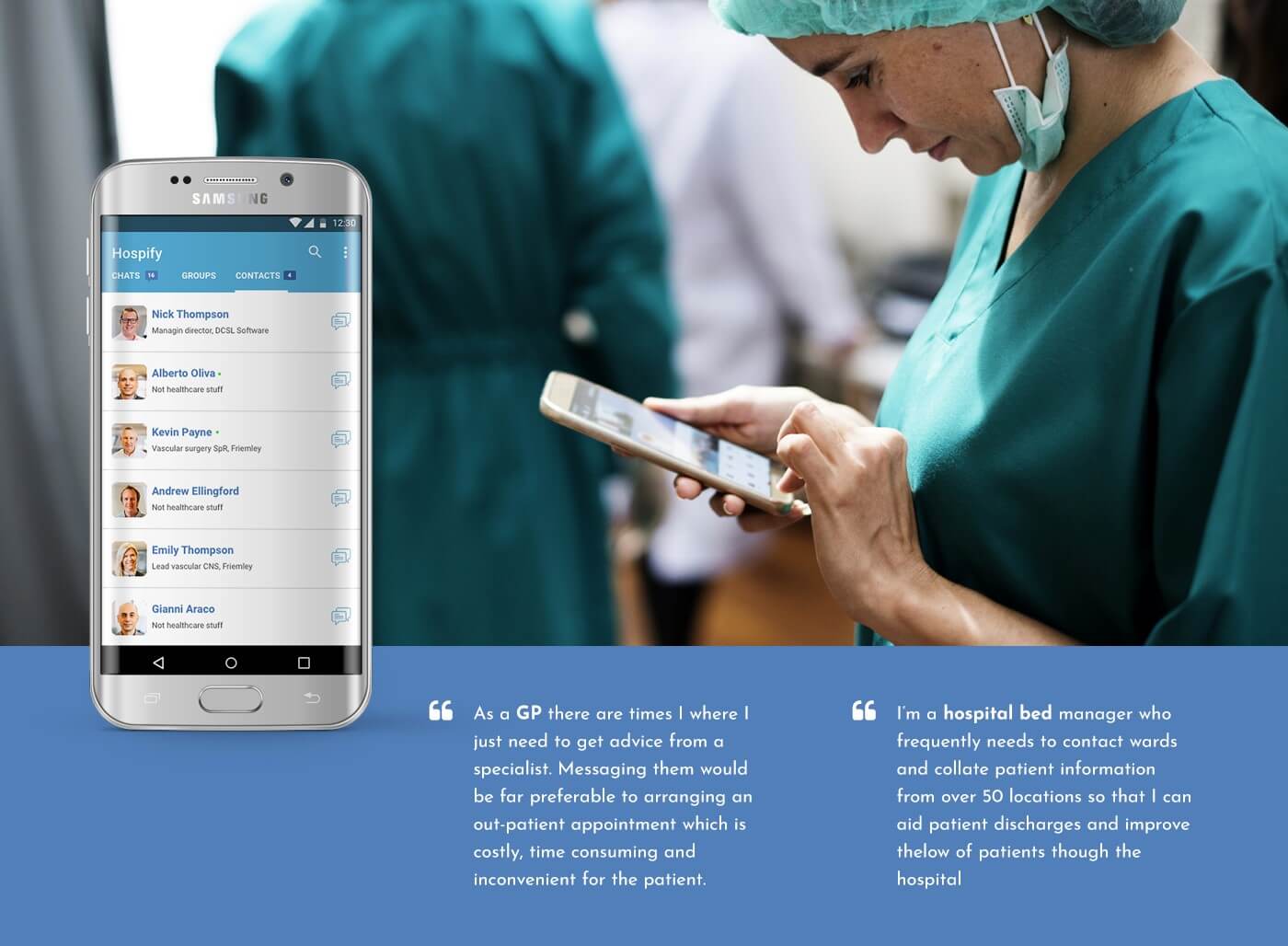 Interested in developing a mobile app for your business?